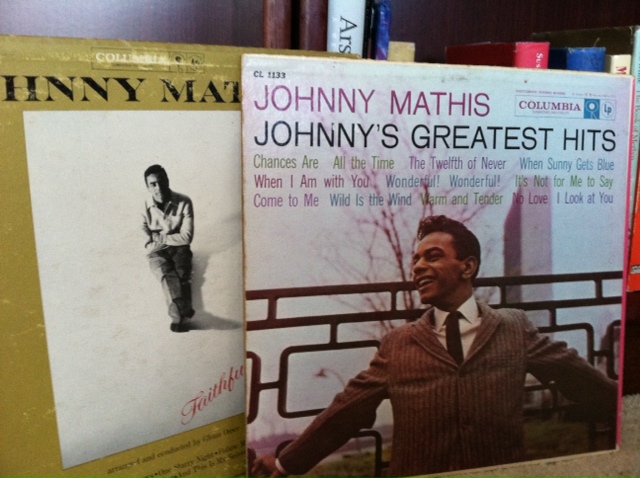 Create a poem based on song titles.

For example, here are the titles from “Johnny’s Greatest Hits” (Johnny Mathis, Columbia).

Chances are
All the time
The twelfth of never
When sunny gets blue
When I am with you
Wonderful! Wonderful!
It’s not for me to say
Come to me
Wild is the wind
Warm and tender
No love
I look at you

Use the titles as the spine or structure for a writing. I love vinyl and tried it with quite a few collections. I was doubtless influenced by the object itself, the photographs, memories associated with the music or the physical object, etc. As the goal for the first draft, at least, I made a few rules. I used all of the titles. I kept them in the same order. I made only slight changes (like a pronoun or verb form). My strategy was more to expand on the word or phrase. Usually I’m ending up with poems that are (at least in early form) 14-16 lines.

I tried to allow myself to use the words/ideas suggested by the titles. A phrase like “warm and tender” is familiar, almost too familiar–next door to cliche, really. So using those words is a good challenge. Isn’t defamiliarizing language a big part of writing, after all?  I’m cautiously optimistic, having written numerous poems–at least some have potential to be finished.

Recently my parents gave me a bunch of their old records. I’m finding it most appealing to use albums for this writing with which I’m not familiar. Before editing, I might listen to the songs a time or two. Even if you usually don’t need a “prompt” for your writing, this writing could still work as warm-up, or as a section or chapter in an ongoing project you have, even relating to a theme or character you are developing.

For an example, go to:
https://poemsforthewriting.com/2018/06/26/fantome-by-benjamin-teperov/