Celebrating Poems for the Writing at
Manayunk Roxborough Art Center!

All of these poets are contributors to the craft-book Poems for the Writing: Prompts for Poets (Texture Press, 2013). Copies of the book will be available at a discounted price. Do join us in the spirit of community and collaboration.

This event is hosted by Peter Krok, Manayunk Roxborough Art Center’s Humanities Director and editor of the Schuylkill Valley Journal.  The literary series has been on-going at the MRAC since 1990.

CHRIS CUNNINGHAM was educated at Stanford University and Duke University, where he received a Ph.D. in modern American poetry. His work has appeared in numerous magazines, including Slate, Iowa Review, Cincinnati Review, Southwest Review, MQR, and elsewhere. He is the Dean of Faculty at the Lawrenceville School in New Jersey, where he lives with his wife and two children.

VALERIE FOX’S books include The Rorschach Factory (Straw Gate Books) and The Glass Book (Texture Press). She has published writing in Hanging Loose, West Branch, Admit2, Ping Pong, qarrtsiluni, Sentence, Apiary, and other journals. She has taught writing and literature at numerous universities including Sophia University (in Tokyo) and, most recently, at Drexel.

Poet and storyteller LURAY GROSS is the author of three collections of poetry, most recently The Perfection of Zeros, published by Word Tech. She has worked with thousands of students and teachers during her twenty-some years as a Teaching Artist. Known for her energetic and sensitive teaching style, she believes that creative expression is vital to our lives. She was awarded a Fellowship in Poetry by the New Jersey State Council on the Arts and named one of their Distinguished Teaching Artists.

KELLY MCQUAIN grew up surrounded by the mountains of West Virginia’s Monongahela National Forest. His poetry has appeared on National Public Radio and in such venues as Painted Bride Quarterly, Assaracus, Paper Nautilus, Mead, American Writing and the anthologies Poems for the Writing and Rabbit Ears: TV Poems. His fiction has appeared in such journals as Icarus, The James White Review,and The Harrington Gay Men’s Fiction Quarterly. His columns on city life appear in The Philadelphia Inquirer.

DAWN MANNING is a writer, photographer, and rogue anthropologist living in the Greater Philadelphia area. Her poetry has won the San Miguel Writing Contest and placed second in the 81st Annual Writer’s Digest Writing Competition for non-rhyming poetry. She has also received the Edith Garlow Poetry Prize. Her poems have recently been published in American Poetry Journal, Crab Orchard Review, Fairy Tale Review, and other literary journals. Dawn herds cats for a local animal rescue, Animal Friends of Lansdowne. You can also find her through Poetdelphia, a community of writers who host a quarterly literary salon, or at dawnmanning.com.

Poet, essayist, and artist DON RIGGS has been writing 140 syllables each morning for the past decade, approximately. Sometimes he writes 280 syllables, and sometimes that turns into 420. All the prose that he sticks in between each clump of 120 syllables in his regular column (for the magazine Press 1) is filler, what they call a “vamp” in the music biz, to let the reader relax and recuperate energy for the next onslaught of concentrated energy. He also teaches writing at Drexel University. He illustrated and also contributed numerous poems to Poems for the Writing.

Thanks to Elizabeth Stanley for inviting us to Reading Area Community College, October 21, to present a workshop based on Poems for the Writing. A group of students, teachers, and other writers from the community wrote and shared fibonacci poems, get-to-know-you cinquains, rules poems, and unanswerable letter poems. The workshop was a lot of fun–the Ravens Lounge was full of energy and great ideas.

Later, also in the Ravens Lounge, we read as part of the Bruce Stanley Memorial Poetry Reading series. An open mic with the Berks Bards followed. For more on the Berks Bards events, check out their blog: http://berksbards.blogspot.com/

Thanks so much to Elizabeth for this wonderful opportunity.
–Valerie and Lynn

Often I use photos to help me write poems. I will probably have remembered the main point of the poem, but looking at photos can help me if I am stuck, or need to go in another direction – or just want to remember supporting details. Here are some photos I took recently on walks around my new neighborhood (in Mexico City). I am certain a couple of them will turn up in poems…. 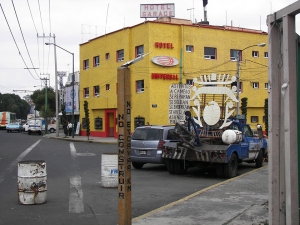 (Philadephia-based Kelly McQuain is a contributor to Poems for the Writing, from Texture Press. See “Superman.”)

Check out The Prompt for text, audio, photo, and video prompts.

Here’s the link for text prompts: